Quilting group, Rainbow Quilters have teamed up to raise money for EDAN-Lincs (End Domestic Abuse Now), a Lincolnshire based charity that provides assistance and support to the victims of domestic abuse and their families.

In January of 2021 a Lincolnshire quilter was inspired to create a group quilt that captured people’s experiences of the COVID-19 pandemic in 2020.   The idea was developed and a new group, Rainbow Quilters, was formed to create what became their ‘2020 Reflections Quilt’.

Spreading news of the project to individuals and groups who might have been interested in participating was difficult as the UK was in lockdown at this time.  Yet, within a few weeks 26 quilters, aged between 13 and 91, with varying degrees of experience had signed up to make blocks for the quilt. 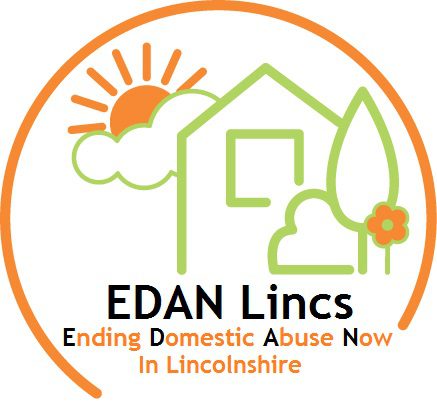 Many reasons were given for wanting to be involved:  to relieve feelings of isolation, loneliness and boredom; to have something positive and purposeful to concentrate on; to interact with others and to do something constructive.

Whatever the reason for joining Rainbow Quilters the enthusiasm for the project grew and people started to work on their second and even third blocks.   We even had someone from Germany send in a block after hearing news of the project from her friend who was involved with the project!

In total, 45 blocks were created for the quilt.  Perhaps, the hardest part of the whole project was deciding how these blocks should be put together.  After much deliberation it was decided which blocks should go where and to sew the blocks into 9 strips of 5 blocks.

The quilt was completed in early May 2021 at time when lockdown restrictions prevented groups of more than 6 people to meet at all, either inside or out.   The group eventually got to meet their fellow quilters and see the finished quilt for the first time on 6th of June after lockdown restrictions were eased for outdoor gatherings. 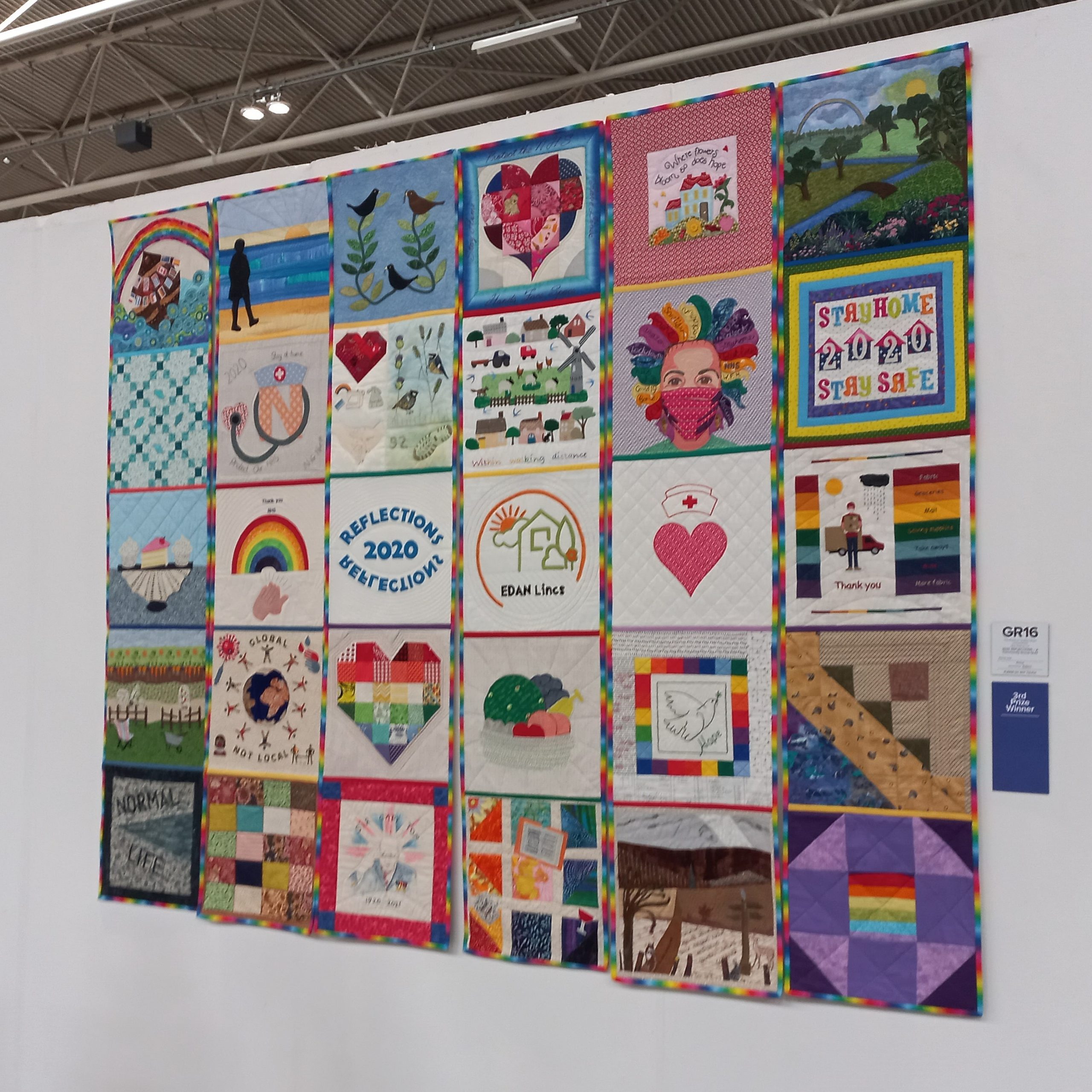 It was decided to enter the 2020 Reflections Quilt into the Group Competition of the 2021 Festival of Quilts at the NEC.  The idea being that it would be really nice for every contributor to be able to say that they had exhibited at the Festival of Quilts.  It came as a great surprise to all of us when we learnt that the quilt had won 3rd prize in the Group Competition!

It was also decided to use the 2020 Reflections Quilt to raise funds for a good cause.  Rainbow Quilters were unanimous in wanting to support a charity that had made a big impact on the lives of people during the COVID-19 pandemic and chose EDAN-Lincs (End Domestic Abuse Now).  This Lincolnshire based charity provides assistance and support to the victims of domestic abuse and their families.

To help raise funds a booklet telling the story of how the group came together and the inspiration behind each of the individual blocks of the quilt is being sold for £2.50.

Raffle tickets, offering one lucky person the opportunity to win one of the 9 strips of the quilt are also being sold at 3 for £5 (please email for details).  The raffle will be drawn at the end of the May 2022 when their fundraising year will come to an end.

They plan to donate the remaining 8 strips of the quilt to one or more good homes in the Lincolnshire area. 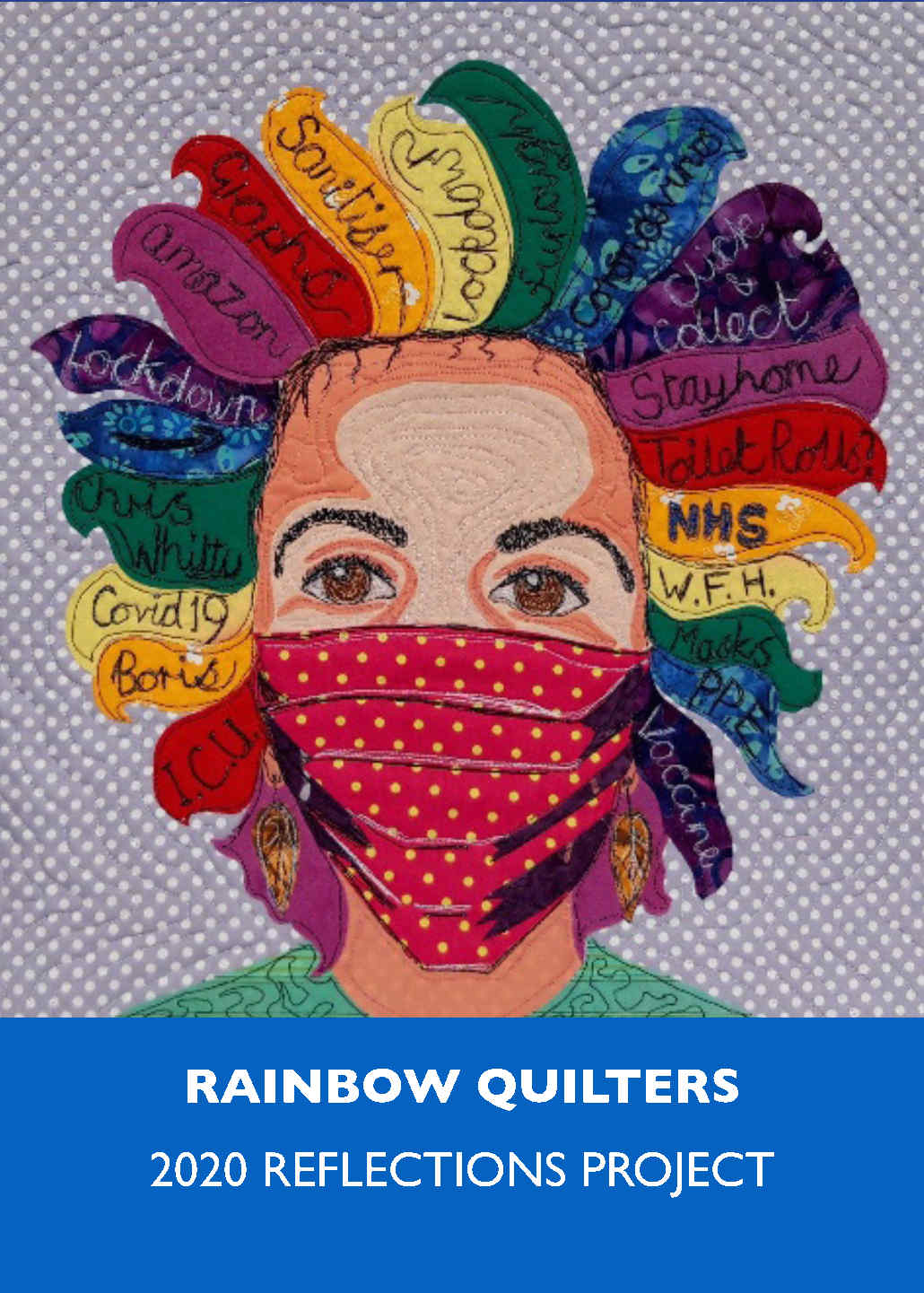 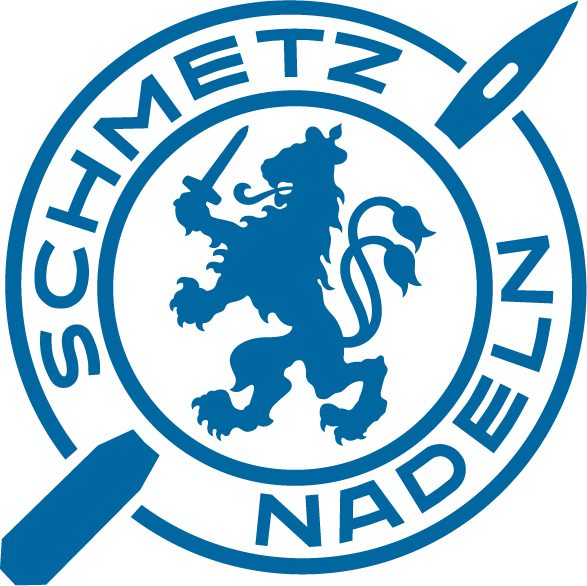